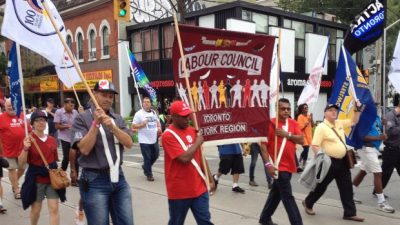 Toronto’s annual Labour Day will not finish at Toronto’s Exhibition Place as it usually does because of an ongoing dispute between locked-out workers and the venue’s board of governors. Marchers will show their solidarity with the workers by not crossing picket lines outside the C-N-E. Unifor President Gerry Diaz spoke to the group before they started marching and took a jab at Premier Doug Ford by saying the government should be talking about decent wages, not a buck a beer. The parade will detour around the CNE, and instead finish at Lamport Stadium in Liberty Village and there are road closures in along the route. Meantime, the exhibition place board of governors and the union representing about 400 stagehands and technical employees say talks this weekend failed to resolve the dispute.Both sides resume talks Tuesday, the day after the ‘Ex ends.