WHITE HOUSE PUSHES BACK ON NEW TELL ALL BOOK 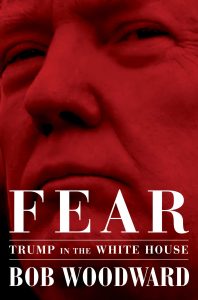 It comes as no surprise, but Donald Trump is labeling a tell-all book from journalist Bob Woodward a “work of fiction.” The U-S President spoke to reporters in the Oval Office Wednesday and suggested that excerpts from the explosive book were timed to interfere with confirmation hearings for Supreme Court nominee Brett Kavanaugh, now underway. The White House is pushing back vigorously against Fear; Trump in the White House which features current and former aides calling the president an idiot and a liar. White House Chief of Staff John Kelly denied describing Trump as an idiot as reported in the book which depicts the West Wing as Crazytown. The book from the veteran Washington reporter comes out September 11th.