One of the world’s great poets has died. 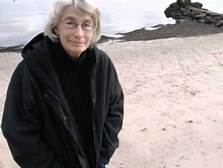 Mary Oliver was a Pulitzer Prize-winner whose odes to nature and animal life brought her critical acclaim and popular affection.

Oliver’s literary executor, says she died of lymphoma yesterday at her home in Florida.

Oliver wrote more than 15 poetry and essay collections; writing brief, direct pieces that sang of her worship of the outdoors and her disdain for greed and other human crimes.

She wrote “Sleeping in the Forest,” to great acclaim

I thought the earth remembered me,
she took me back so tenderly,
arranging her dark skirts, her pockets
full of lichens and seeds.

I slept as never before, a stone on the river bed,
nothing between me and the white fire of the stars

All night I rose and fell, as if in water.

By morning I had vanished at least a dozen times into something better.