As the Raptors fans celebrated a first berth in the NBA Finals, thousands of their fans crowded downtown. And, for the most part, they celebrated safely. 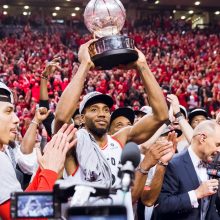 Fans stayed up until the early hours of the morning, packing places like Yonge-Dundas Square. And while there images of people standing on buses or cars in the financial district, there were no reports of any property damage.

Sporting events have been known to draw people out to cause trouble. The 2011 Vancouver riots come to mind when you think of sporting events that were precursor to violence.

The Raptors still haven’t finished the job yet so people in Toronto hope that not only does the team come away with a first ever NBA championship, but that also people are proud of their city and won’t feel a need to cause it any damage.