Your commute up and down the Don Valley Parkway will take a little longer as of today until at least the middle of August and maybe into the fall. 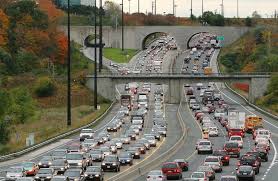 Toronto has launched phase one of rehab work on on the bridges at Don Mills, Spanbridge, Wynford and Lawrence Avenue East. There will be two lanes available under those bridges at all times, expanding to the usual three lines at off peak travel times.

Construction on the bridges will be completed in two phases with the second phase expected to take until October.

Crews will work twenty four hours a day seven days a week to get the job done as quickly as possible. The city says with traffic loads generally lighter during the middle of the summer, this is the best time to create the minimum of disruption.