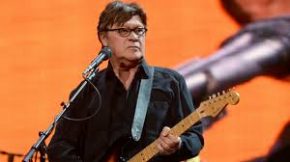 The singer-songwriter was born in Toronto, July 5th 1943 and grew up and visiting his mother’s relatives on the Six Nations Reserve south of Brantford, where he learned to play guitar.

Then came his involvement with “The Band” and a career that’s lasted more than 50-years.

Robertson says he has no plans to slow down. He’s just finshed scoring the movie “The Irishman” for Martin Scorsese. He has a documentary coming out in the fall and this week is celebrating the 51st anniversary of “The Band’s” seminal album “Music from Big Pink.”

Robertson is a member of the Canadian Songwriters Hall of Fame and an Office of the Order of Canada.