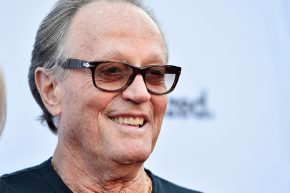 Fonda starred in, amongst other things, the 1969 iconic counter-culture movie Easy Rider. It’s a movie he also helped write.

His Academy Award win came for Best Actor for the 1997 movie Ulee’s Gold.

He was from an acting family. Peter was the son of Henry, brother to Jane and father of Bridget Fonda.