Pierre Nantel was recently booted from the NDP caucus over a report that he was in talks to run as a Green Party member in this fall’s federal election.

Today, he made the switch official. 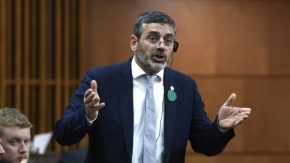 The Longueil-Saint Hubert MP held a media conference with Green Party leader Elizabeth May Monday to make the switch official.

“If there’s someone who works to unite people in the House of Commons, it’s certainly Elizabeth May,” Nantel said in French at the media conference.

“I’ve spoken to many people, especially young people and young families who are worried about their children that the climate crisis is their biggest priority. For most of the people I speak with, that’s the first thing they say.”

Nantel was first elected in 2011 as part of the Orange Wave under Jack Layton in the province that saw the NDP make historic gains.

He was re-elected by a mere 700 vote majority ahead of a Liberal candidate back in 2015.