CHERRY ST. BRIDGE BACK IN SERVICE THIS WEEKEND

After almost a month since it became stuck in an upward position, the Cherry St. bridge will once again be carrying cars in time for the long weekend. 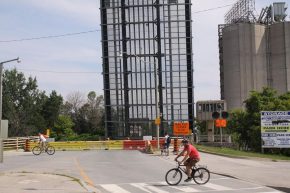 The city announced that effective 7pm on Friday, traffic will once again be able to traverse the crossing.

The news comes a day after city crews managed to lower the bridge. It was the second day they had tried to bring it down after high winds foiled their attempt on Wednesday.

“It has been a long and arduous task for PortsToronto and City staff to reinstate the Cherry Street bridge safely and I’m pleased that crews were able to reopen this crucial link to the Port Lands in time for the long weekend,” Mayor John Tory said in a press released. “Thank you to all the residents and local businesses who rely on this bridge for their patience throughout this process.”

The bridge became stuck in a vertical position on Aug. 1 when the mechanism that raises and lowers the bridge broke down.

It’s scheduled to be replaced when the Portlands redevelopment takes place.