Canada’s finance minister is responding to a call by the opposition Conservatives to deliver an “urgent” fall economic update. 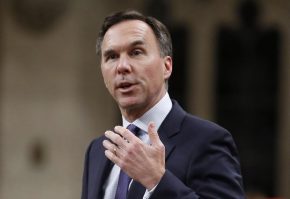 Bill Morneau has released a statement which says the economy is resilient and the first thing the governing Liberals plan to do is bring in their promised tax cuts for the middle class.

Conservative MP Pierre Poilievre says he wants to see the Liberal government provide a fiscal update before the holidays that would include tax cuts for entrepreneurs, efforts to get rid of regulatory red tape and a plan to phase out the deficit over the next few years.

The Conservative finance critic also notes the country lost about 71,000 jobs last month; the biggest monthly drop since the financial crisis of a decade ago. The American unemployment rate is the lowest it’s been in half a century.

Meantime, NDP Leader Jagmeet Singh is calling out Bloc Quebecois leader Yves-Francois Blanchet for agreeing to vote in favour of the Throne Speech and failing to push the government.

Singh says by contrast, he wants to work with the government, not just to keep the Liberals in power but to do what’s right for people.

A vote on the throne speech is not expected until the new year.