Olivia Newton-John got quite the surprise from a fan who recently bought at auction, the iconic black leather jacket she wore in Grease. The buyer, who wants to remain anonymous, paid $243,000 for it at a charity auction, and surprised the Grammy-winning singer and actress by giving it to her. Newton-John was clearly overwhelmed by the gesture. 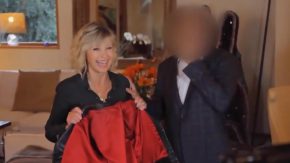 The 71-year-old decided to auction off more than 500 items from her career … including costumes, awards, jewelry and other memorabilia…to raise funds for her cancer center after she was diagnosed with breast cancer for the third time in 1992.
To watch the heart warming exchange,