Canada’s Finance Minister says he hopes to have a plan in place early in the new year to tweak Canada’s fiscal stabilization program. 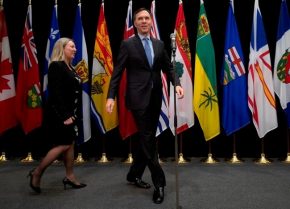 Bill Morneau made the commitment in Ottawa Tuesday in a meeting with his provincial and territorial counterparts. Three provinces have been pushing for changes to the program, which provides assistance to provinces facing tough times financially. They say a cap of $60 per resident needs to be bumped up. Morneau says in addition , his government will also re-visit a pledge to create a national pharmacare program. These issues will come up again  at a First Ministers meeting early in the new year.