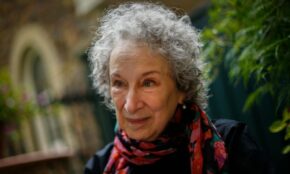 The Dayton Literary Peace Prize announced that the author of  The Handmaid’s Tale and The Testaments  is this year’s winner of the  Richard C Holbrooke distinguished achievement award. It’s named for the late U.S. diplomat who brokered the 1995 Bosnian peace accords reached in the Ohio city. The 80-year old Atwood is a prolific writer of poetry, fiction, nonfiction, essays and comic books.