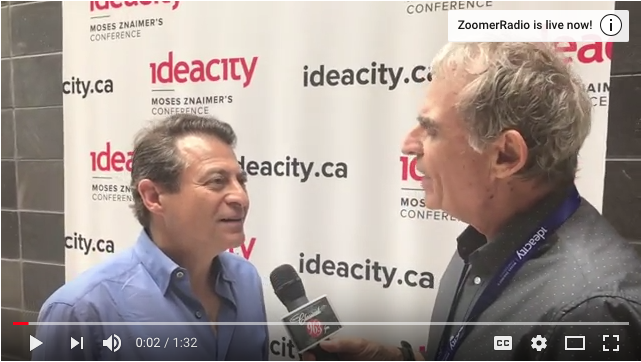 In 2014 Fortune Magazine named Peter Diamandis as one of the World’s 50 Greatest Leaders and Michael Kramer caught up with him for an interview at ideacity 2018.

Diamandis is the Founder & Executive Chairman of the XPRIZE Foundation, which leads the world in designing and operating large-scale incentive competitions. He is also the Co-Founder & Exec Chairman of Singularity University, a graduate-level Silicon Valley institution that counsels the world’s leaders on exponentially growing technologies.

As an entrepreneur, Diamandis has started 17 companies. He is the Co-Founder and Vice-Chairman of Human Longevity Inc. (HLI), a genomics and cell therapy-based company focused on extending the healthy human lifespan, and Co-Founder and Co-Chairman of Planetary Resources, a company designing spacecraft to enable the detection and prospecting of asteroid for fuels and precious materials.

Diamandis is a New York Times Bestselling author of two books: Abundance & BOLD. He earned degrees in Molecular Genetics and Aerospace Engineering from the MIT, and holds an M.D. from Harvard Medical School.

In Fall of 2016 the Greek Government honored Diamandis by issuing a 1.2 Euro stamp into circulation bearing his photograph.

FIND OUT MORE AT ideacity.ca.