With New Years Eve around the corner Gene Stevens looks back at those we Lost in 2017... 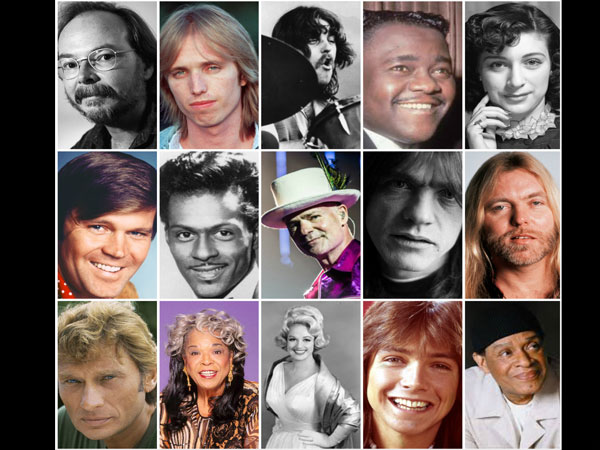 Another year is about to wrap-up – and what a year it’s been! Again, we lost so many favourite stars – people some of us idolized in our youth, larger-than-life icons we never thought of as aging or dying. But time waits for no one, and fate can be cruel – lavishing immense fame and fortune on some, while at the same time cursing them with incurable diseases, or punishing youthful indiscretions with later-in-life illness.

Take a look at this list of those I’ll be spotlighting in my December 31st ‘In Memoriam’ edition of ‘Vintage Favourites’ – and think of who’s death most affected you. Was it a teenage idol like David Cassidy, or an arena-rocker like AC/DC’s Malcolm Young? A ‘founding father’ of rock’n’roll like Chuck Berry or Fats Domino, or was it perhaps that most-Canadian of rockers Gord Downie ? There were others too like ‘Touched by an Angel’ Della Reese, jazz singer Al Jarreau, ‘the French Elvis’ – Johnny Hallyday for whom one million people stood along the Champs-Elysees in Paris to witness his funeral procession.

I find it difficult to compare levels of sadness and tragedy – in their own way, each loss was heart-breaking, and mostly unexpected. But, I find the ravages of Alzheimer’s Disease particularly cruel … for both the sufferer and his family and friends, who eventually fade from memory – as do all the wonders, accolades, and achievements one has accomplished in a lifetime. And despite the many superstars who died, there’s one who’s accomplishments alone fills several books and who faced Alzheimer’s long slow slide into oblivion – Glen Campbell. Perhaps his passing saddened me the most. We saw it coming for so long, and could do nothing but watch and wait. That is sad indeed.

Please join me for a wonderful acknowledgement of another year’s giants who moved into their respective performance heaven…this Sunday, the 31st at 2pm. And, may I wish you and your family the very best for the new year. I’m working on a terrific line-up of exciting ‘Vintage Favourites’ for 2018. Cheers – Gene.