Imagining a 'Mount Rushmore' of Rock'n'Roll 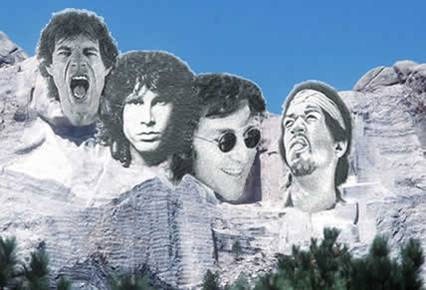 If there was a ‘Mount Rushmore’ of rock’n’roll … it would have to be more like a mountain chain, to fairly recognize the pioneers like Little Richard, Chuck Berry, Elvis Presley and Buddy Holly, alongside 60s icons like The Beatles and Rolling Stones, Bob Dylan and later legends like David Bowie and Elton John. But somewhere among these faces, you’d also find the originator, Fats Domino. His ‘Fat Man’ – recorded in 1949 – is considered among the earliest examples of the emerging rock’n’roll music. And, born on the same day as Fats, in a different year, and certainly a different location, Johnny Cash was a pioneer of the evolving country music scene that embraced ‘rockabilly’ and joined with R&B to create rock’n’roll in the mid-50s.

After the glory days of those pioneers, a second wave of mostly guitar bands rose in the mid-60s – many of them part of the ‘British Invasion’, led by The Beatles. And although he was the youngest of ‘The Fab Four’, George Harrison’s outstanding guitar work was a hallmark of their sound, and he would be the first former Beatle to have a #1 charting hit after their break-up.

Fats, Johnny and George were all born in this coming week – and I’m throwing a special event edition of ‘Vintage Favourites’ to recognize some of their best work, as well as some unexpected surprises. So I hope you’ll join me for ‘Vintage Favourites’ this Sunday (Feb.23rd) for ‘Three Giants’, starting at 2pm., on Zoomer Radio.