TORONTO POLICE LOOKING FOR STOLEN U of T PAINTINGS

Toronto Police are trying to track down three valuable paintings stolen from the University of Toronto. Investigators believe the works were taken between January 30th and February 10th, from three separate locations.   The Church of Santa Maria Della Salute by Francesco Guardi,  Morning at Peggy’s Cove by William E. deGarthe, and Credit River by Yee Bon are the works missing. 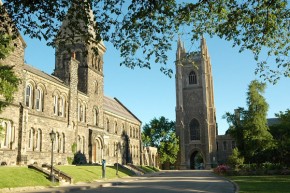 Police say thieves cut out the paintings and removed them from their frames. Police are appealing to the public for help identifying the individuals responsible for taking the artworks.