Governor General David Johnston says Canadians can be “inspired” by the latest recipients of the Order of Canada. 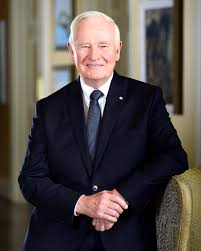 Friday, Johnston announced the appointments of 75 members, 22 officers and three companions — the highest elevation of the title. The governor general issued a statement urging everyone to be inspired by the examples set by these remarkable Canadians and use this occasion to build a smarter and more caring country. The list of people who will receive their honours at a ceremony next year includes Nunavut-based throat singer Tanya Tagaq Gillis, Jan Andrews, a British-born storyteller and author of a number of children’s books, and former Ontario Lieutenant-Governor David Onley. Retired Supreme Court of Canada justice Morris Fish, astrophysicist Victoria Kaspi and author Michael Ondaatje have been made companions of the order. Next year marks the 50th anniversary of the Order of Canada, which is considered one of the country’s highest civilian honours.