BOB DYLAN FINALLY GETS HIS PRIZE

Nobel literature winner Bob Dylan will finally receive his diploma and medal this weekend, while he’s in Stockholm performing concerts Saturday and Sunday. 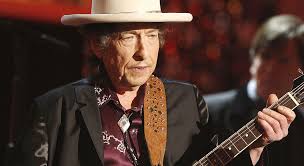 But he won’t be giving his Nobel lecture during his concert visit. The Swedish Academy says a recorded version will be sent at a later date. Dylan declined the invitation to attend the traditional Nobel Prize banquet and ceremony last December.