Portugal has declared three days of national morning as the forest fire death toll has reached 62 and expected to climb. 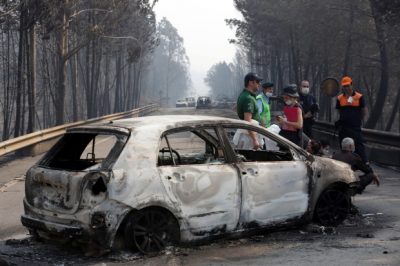 Many of the victims were killed when their cars were engulfed by flames that swept across a country road. Authorities say they’re still investigating the cause, but temperatures as high as 40 degrees Celsius in recent days may have played a part. Sixty fires broke out at the same time and 1,700 firefighters are battling the blazes around the clock. The government also says that 360 soldiers are joining the firefighters. The tragedy is the worst in recent memory in the southern European country, which often suffers wildfires during the hot and dry summer months. The European Commission says it is working with EU member states to respond to the call for assistance issued by Portuguese authorities.