Tara Roe-Smith from Alberta was at the festival with her husband when a gunman opened fire from the 32nd floor of the nearby Mandalay Bay Hotel. The 34-year-old was a mother of two was confirmed by family members as the fourth Canadian killed in the mass shooting. A GO-FUND-ME page has been set up for the family. 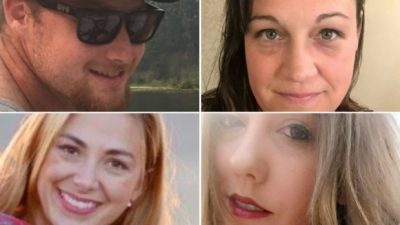 Family and friends had already confirmed the deaths of Jessica Klymchuk, a mother of four from Alberta, 23-year-old mechanic Jordan McIldoon of B-C and Calla Medig also from Alberta. Tuesday morning, more than a dozen investigators wearing blue protective booties entered the concert site to pick through the scene for clues. Yesterday, Nevada’s attorney general compared the scene with a war zone.

Jessica Klymchuk, Valleyview, Alta.
The mother of four was an educational assistant, librarian and bus driver for St. Stephen’s School. Klymchuk got engaged in April, and was in Las Vegas with her fiance.

Jordan McIldoon, 23, Maple Ridge, B.C.
McIldoon, an only child, was just days away from his 24th birthday and would have completed a course to qualify as a heavy-duty mechanic in a month.

Calla Medig, Jasper, Alta.
The west Edmonton restaurant worker, who grew up in Jasper, Alta., had made attending the Route 91 Music Festival in Las Vegas a tradition. This was her third annual trip to Vegas.

Tara Roe Smith, 34, of Okotoks, Alta.
The mother of two young boys, described as a “beautiful soul,” was in Las Vegas with her husband, Zach, for a weekend getaway.

Jan Lambourne, Teulon, Man.
The married friend of Jody Ansell, Lambourne was shot in the abdomen and shrapnel fractured her pelvis. She had surgery to repair her intestine.

Jody Ansell, Stonewall, Man.
Ansell was shot in the right arm. She was discharged from hospital late Monday.

Steve Arruda, Calgary
The referee with an adult hockey organization called Hockey North America underwent surgery and was in intensive care in a Las Vegas hospital. He helped his wife to safety, told her run, then stayed to help others get to safety.

Carrie-Lynn Denis of Leoville, Sask.
Denis, who was shot in the foot, grew up on a local farm and is a community volunteer.

Sheldon Mack, Victoria
Mack was shot twice and suffered a ruptured colon and a broken forearm. A friend used his belt as a makeshift tourniquet. He was recovering in intensive care.