Two workers at a recycling plant in North York were taken to hospital after being exposed to an unknown chemical substance and 50 others had to be de-contaminated. The employees were sorting blue box items when they became ill with irritation in their eyes, nose and throat. Toronto fire wearing hazmat suits responded just after midnight Friday. Fire officials have ruled out pepper spray but haven’t identified the toxic substance yet. The building has been evacuated. Fire officials will investigate Friday along with the ministries of the environment and labour. The plant is on Arrow Road, west of highway 400 near Sheppard and Finch. 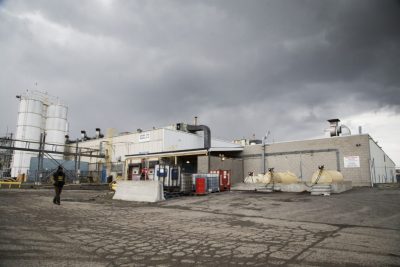