Hydro One wants to increase the price of power because it says it needs money for new equipment. The utility is asking for a half a per cent increase this year and a 4.8 per cent bump next year. Hydro One C-E-O Mayo Schmidt says the increase is needed because the utility must replace aging equipment. He warns if the equipment fails, it could mean power outages. The Liberals slashed hydro bills by an average of 25 per cent this year, after soaring costs helped send their approval ratings to record lows. The Zoomer advocay group CARP launched a campaign last year called HEAT OR EAT, to lobby for lower electricity rates for vulnerable seniors. 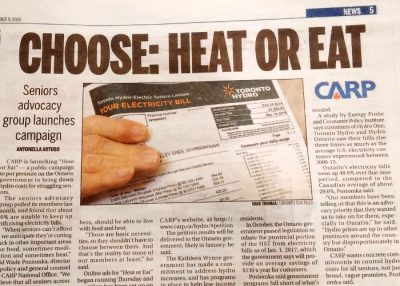