Some King Street business owners in Toronto have ramped up their fight with city hall. 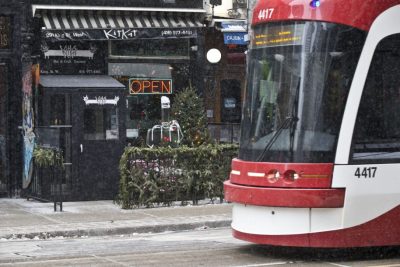 They’ve launched a social media campaign to send a strong message to city hall – scrap the King Street Pilot project. Kit Kat restaurant owner Al Carbone, who is leading the charge, says some business owners report a 50 percent drop in revenue. The two sides are offering far different numbers relating to travel time along King since the project began 3 months ago that gives priority to streetcars. Councillor Michael Thompson says he understands their concerns but is hoping for a compromise. The city claims the King street pilot has increased both the speed and ridership of the streetcars. Councillor Georgio Mammoliti is siding with the business owners. He released a a statement Monday warning John Tory he picked a fight with the wrong people. On social media, business owners opposed to the project are encouraging the use of the hashtag #REVERSEKINGCARBAN