The group protesting outside The Antler Kitchen and Bar on Dundas Street West claim no animal wants to be killed and eaten. The group’s first protest last week sparked international media attention after the owner cut up a deer leg and consumed it in front of the demonstrators. 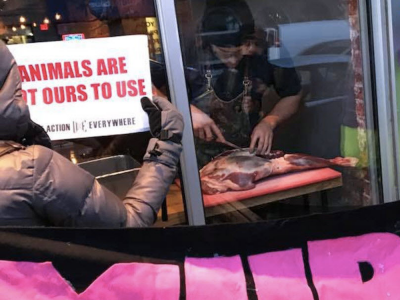 The west-end eaterie serves local and seasonal food like venison, wild boar, duck and rabbit. The  vegan activists are angered by the restaurant’s description of its meat as humane.Owner Michael Hunter says there’s been an increase in reservations since the first protest last week and claims his  restaurant is booked solid for a month.