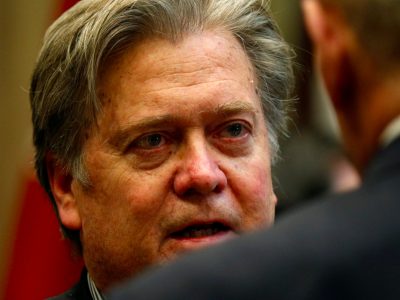 Police could be seen using batons to hold back the chanting crowd.

In that crowd, was David Langille, who chose to protest the debate.  “I think the people of Toronto have shown how they feel about the far right and we want to protect our democracy and think it’s very important.” said Langille.

The sold-out, 90-minute debate in Toronto featuring the former strategist who helped elevate Donald Trump to the Oval office was targeted by angry protesters was part of the Munk series of debates.

Bannon was up against Conservative Commentator David Frum.

Protesters opposed to giving Bannon a platform to express what many feel are dangerously far right opinions, turned out in force.

Police held back the demonstrators outside the downtown venue with batons, and made several arrests.