AT LEAST 220 PEOPLE KILLED IN TSUNAMI IN INDONESIA 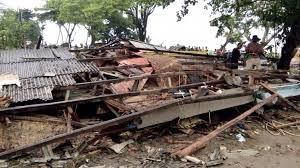 At least 220 people have been killed by a tsunami in Indonesia.  Witnesses describe seeing a wall of water crashing into the coast around Indonesia’s Sunda Strait Saturday night.  At least 843 people were said to be injured and 28 missing.

Scientists say the tsunami was probably caused by the eruption of Anak Krakatau, a volcanic island formed from the nearby Krakatau volcano.

But they also cited tidal waves caused by the full moon.

Saturday’s tsunami came just days before the 14th anniversary of the 2004 earthquake and tsunami that killed more than 200-thousand people in 14 countries, including Indonesia.

(Above photo courtesy of The BBC)