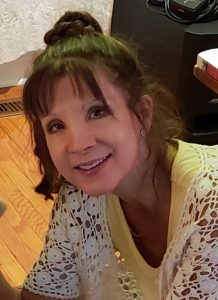 Toronto Police are hoping the public will help them find a missing 59-year-old woman.

Alice Wolski hasn’t been seen or heard from since Friday when she was in the Martin Grove Road and Cowley Avenue area at around 8 a.m.

Wolski is described as 5’7″, with a slim build, long dark brown hair past her shoulders with green eyes.

Investigators say the 59-year-old was wearing a dark brown 3/4 length coat with cream fur on the hood.  She was also wearing black knee-high boots and was carrying a large black purse with metal buckles.

Police have set up a command post on Cowley Avenue and are asking anyone who has seen Alice Wolski to come forward.