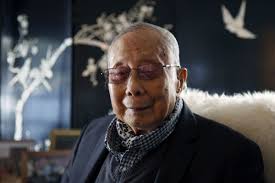 The author of the bestselling “The Flower Drum Song” has died.

C.Y. Lee’s novel was adapted into a Rodgers and Hammerstein musical and Oscar-nominated movie.

Lee’s son, Jay Lee says his father died on November 8th in Los Angeles, but the family decided at the time not to make his death public.

“Flower Drum Song,” the story of Chinese immigrants in San Francisco, was published in 1957.

It attained widespread popularity despite criticism that it stereotyped Chinese culture.

The Rodgers and Hammerstein show, directed by Gene Kelly, ran on Broadway from 1958-60.

A 1961 movie adaptation, a rare Hollywood production with an Asian cast, was nominated for five Academy Awards.