It’s now just a plot of land adorned with a plaque and flags east of Toronto along the Oshawa – Whitby border, but during the Second World War, a major spy training school was bustling with covert activity. 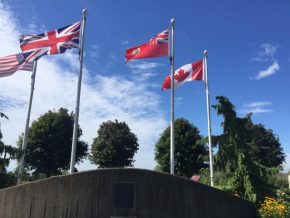 Camp X  has a history rich with intrigue and some famous people visited the top secret facility. The only reminder of this top secret spy training school is a plaque and four flags. Local historian and Camp X expert Philip Hodgson has written eight books on the subject. He says the school not only trained spies, but would-be assassins received weapons training.The area is referred to as Intrepid Park, the code name for Canadian soldier and spy master William Stephenson, who created the Whitby training facility. 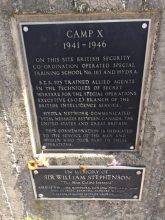 Many consider Stephenson to be the real life inspiration for Jame Bond creator Ian Fleming and according to Hodgson, there’s plenty of evidence to suggest Fleming visited the school more than once, and borrowed tactics learned there for his popular spy franchise. It was also the inspiration for the movie A Man Called Intrepid. The camp was such a secretive fortress, that locals knew to stay away because armed guards wouldn’t hesitate to shoot first and ask questions later. 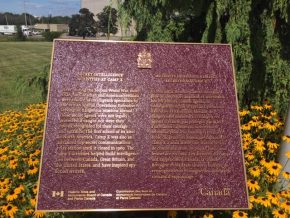 Large craters still dot the land, from plastic explosives testing. Hodgson has collected hundreds of artifacts from the school over the years. You can tour Camp X as part of Doors Open Oshawa on September 28th.

Listen to a report from Christine Ross here.