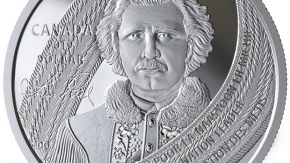 There’s a new coin to mark the 175th anniversary of the birth of Louis Riel, the Metis leader who is considered the founder of Manitoba. Issued by the Royal Canadian Mint, it features the official Metis language, an engraving of Riel’s signature and a portrait of him wearing a jacket covered with floral beadwork. The President of Manitoba’s Metis Federation says Riel is an aspirational role model for all Canadians because he stood for language, Indigenous rights, and justice. The coin was designed by Metis artist David Garneau and 15,000 will be produced at a cost of $60 and available next month. Riel was executed in 1885.