Just in time for Halloween, a series of spooky evening lantern tours on the haunted grounds at Toronto’s historic Fort York.

Fort York now sits amid a busy thriving community beneath the busy Gardiner Expressway. But it was a bloody battlefield during the War of 1812. 157 British soldiers and 327 American soldiers died on the grounds and their remains are buried in military cemeteries. The Lantern Tour includes a stop at these graveyards and four buildings on the site. 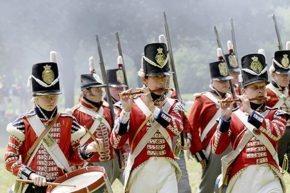 Fort York historical interpreter Samantha Horne says visitors can expect a mostly historical tour with a Halloween twist that will include stories of strange sounds and unexplained activity. Horne says on several occasions, she’s experienced  hearing footsteps in empty buildings and assumed it was a co-worker pulling a prank. Upon further investigation, she discovered she was all alone.  She speaks about the experiences in a matter-of-fact tone, but admits there’s definitely some unexplained things happening at the Fort. About a dozen years ago,  staff reported a scary incident at night in the Centre Block, when the fire alarm was pulled from within the building. Fire crews arrived to investigate and found nothing, but were shocked to find the doors to the building still locked from the inside. 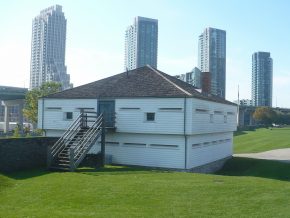 Fort York Centre Block, considered to be
the most haunted building on the property.