OPPOSITION NOT IMPRESSED WITH THRONE SPEECH

Disappointed with the Throne Speech, Conservative Leader Andrew Scheer is already saying he’ll be introducing an amendment  in the House of Commons Friday. Scheer notes there was nothing to promote national unity and no mention of the energy sector which he says sends a negative message. N-D-P Leader Jagmeet Singh says the speech fell short and wants to hold talks with the Liberals to push for more. The Trudeau Liberals’ blueprint did win the support of the Bloc Quebecois to keep the minority government alive. The speech reiterates the Liberals’ 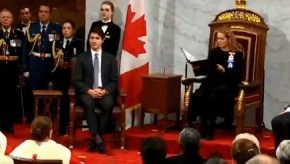 campaign promises to take stronger action to fight climate change, lower taxes for middle-class Canadians, strengthen gun control and take steps towards national pharmacare. The Liberals are also promising to cut the cost of cellphone and wireless service by 25 per cent.The speech struck a humble tone, with the government appealing to the opposition parties to help make the minority Parliament work.

NEW MATERIAL ON THE WAY FROM "THE SHAT"