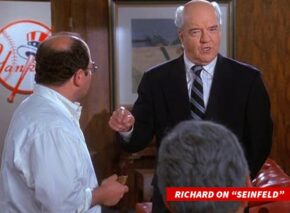 To many, Herd  was known as George’s Yankees boss on Seinfeld. He also played William Shatner’s boss, Captain Sheridan, on the police show T-J Hooker, and a Klingon on  Star Trek The Next Generation.

The actor  appeared in films including  All The President’s Men and  The China Syndrome. He had a face most people knew, even if they didn’t know his name. Richard Herd died of cancer at 87. Herd briefly served in the army during the Korean War. He leaves his wife of 40 years and three children.