The day after the province says nearly 32,000 tests were done , Premier Doug Ford says he’s hopeful that up to 60 pharmacies will offer COVID testing by the end of this week. Asked repeatedly how his government will address long lines at testing centres, the Premier defended his plan.
“We’ve ramped up to 40,000 tests a day,” Ford told reporters. “We’re doing more testing here in Ontario than ever province combined in the entire country and we’re only 38 percent of the population.”
The Ford government’s fall preparedness plan will be released this week, possibly as early as Tuesday.
Meantime, the Premier, himself a vintage car enthusiast, didn’t hold back on organizers of this weekend’s massive Ancaster car rally that broke social gathering rules. 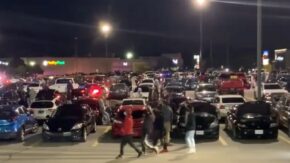 “If we weren’t so backlogged on MRI’s, I’d send you to the MRI to get your brain scanned because I just don’t think there’s anything in there,” Ford told reporters.
Ford says if you organized or attended and didn’t get fined, you’re not out of the woods yet because police have 30 days to scan licence plates to track down participants. He says close to 1,000 people weren’t there for a ‘show and shine’ but had planned to drag race and do donuts on the highway.