NEW RESTRICTIONS IN ONTARIO AMID INCREASE IN COVID-19 CASES 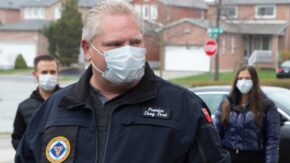 “We’re expanding the masking policies already in place in many communities to the entire province, that means wearing a mask when shopping, when taking public transit and when at work if you can’t keep two metres between you and your colleagues,” said Premier Doug Ford.

Ontario assessment centers will stop taking walk-ins on Sunday, October 4 so labs can catch up with the backlog of 90,000 thousand samples and starting on Tuesday, October 6, tests at all centres will be appointment only.Premier Ford is asking for patience saying it may take a few days to schedule a test.

The province has put a pause on social circles across the province. What does that mean for Thanksgiving? Premier Doug Ford would only say keep the bubble tight, and limit it to your own household.

“People who do live alone and are experiencing isolation, we want them to be able to have a connection to another group for mental health and social purposes so we’re just asking people to be reasonable, please try to keep your gathering small to your immediate household as much as possible,” said Minister Elliott.

Critics says the province’s new restrictions don’t go far enough including Toronto’s Medical Officer of Health who’s imploring the province to restore lock down measures that were in place last spring. But Doug Ford defends the new restrictions. Toronto’s top doctor Eileen DeVilla is recommending a ban on indoor dining in the city, and asking residents to only leave home for essentials.