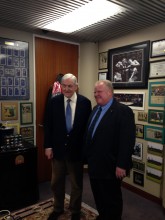 Toronto Mayor Rob Ford has not had many defenders since he admitted that he’s smoked crack cocaine and was then stripped of most of his powers by Toronto City Council.  But former Media publisher and now The Zoomer co-host Conrad Black is backing Rob Ford, saying until Ford is charged with a criminal offense he should be allowed to continue his duties as mayor.  Conrad Black sat down with Mayor Ford on Friday for a one on one conversation.  In an excerpt, Ford says, “If they want me to do a drug test, a urine test, I’ll do one right now.  If there’s any drugs in my system, any alcohol in my system, I have no problem doing that test.” To which, Conrad Black jokes, “Rob, there’s absolutely no need to do a urine test right now.”

You can see Conrad Black’s entire interview with Rob Ford tonight at 9 on The Zoomer on our sister station, Vision TV.  Click here for more.