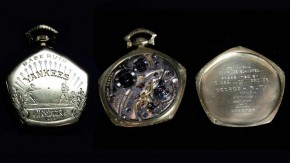 For decades it was thought to be lost to history.  Babe Ruth’s 1923 World Series championship pocket watch is coming to a New York City auction, where it’s expected to fetch at least $750,000.

At the time, winning players received watches, which later were replaced by rings, which are still the standard.

The five sided gold timepiece is being sold at Heritage Auction’s Feb. 22 sale.