That was quite a wind storm we had across southern Ontario last night.  Construction material was being whipped off the tops of some buildings, trees were uprooted and power lines brought down, knocking out electricity for thousands.

Toronto Hydro spokesperson Tanya Bruckmueller says crews made some progress overnight, “so we’ve managed to get the number down to 4000…and what was relatively easy for us is we were able to restore large groups of customers. What’s going to start happening throughout the day, is we’ll lose the ability to restore large groups of customers with many of the calls coming in will be smaller localized outages, so it may be one or two homes on a street.” 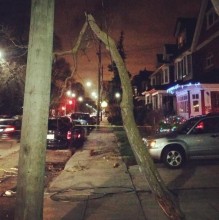 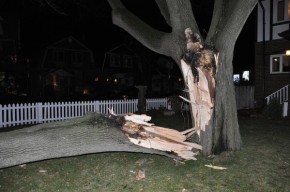 Bruckmueller also explains that any relevant calls will be appreciated.  “Don’t assume your neighbours called because like I said, it could be a very small localized outage and not just be you.  So make sure to call us at 542-8000 to report it.  And if there are any downed wires or any dangerous situation, please stay clear.”

Hydro One said about 400 outages affected some 87,000 customers across Ontario and warned it could take days to restore power in some areas.