ANOTHER RECORD FOR TURNER PAINTING 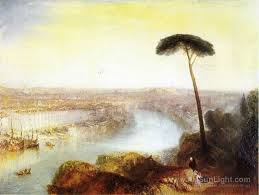 J.M.W. Turner is winning a new generation of admirers – 150 years after his death.

The 1835 Turner oil painting “Rome, From Mount Aventine” has sold for $54 million at Sotheby’s in London. That’s almost more that 50 percent more than the pre-sale estimate.

It’s also a record for a Turner work – at a sale that comes amid renewed interest in one of Britain’s greatest artists – brought on by an acclaimed bio-pic.

Alex Bell, co-chair of Sotheby’s Old Master Paintings Department says “Rome, From Mount Aventine” – is so well preserved that every fingerprint of the artist, every flick of the brush, every scrape of his palette knife can be clearly seen.”