German Chancellor Angela Merkel will be in Ottawa briefly this evening to give Prime Minister Stephen Harper an update on her efforts to end the fighting in eastern Ukraine. 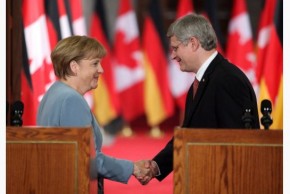 Merkel was in Washington this morning for a previously scheduled meeting with President Obama, amid reports of a rift between the U.S. and Europe over whether to arm Ukraine’s army.

The president said Russian aggression has reinforced the unity of the U.S. and its partners.

They’re attempting to hold a summit Wednesday in the Belarus capital of Minsk.