It was sophisticated; complete with lights powered by a generator.  It was large enough for a person to move around and stand comfortably.

A tunnel-like bunker was dug out,  in the woods near the Rexall Centre in north Toronto.

The Rexall Centre is the tennis venue for Toronto’s Pan Am and Parapan Am games this summer.

It was discovered last month by a Toronto and Region Conservation Authority employee. 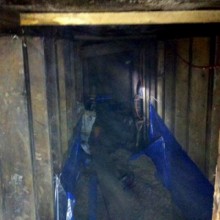 Canadian security experts have been informed of the discovery and Toronto police have scheduled a news conference at 10 this morning with Deputy Chief Mark Saunders, who heads the force’s Specialized Operations Command unit.

Reports indicate there are two possibilities police are investigating; that the tunnel may have been used to bypass Pan Am Games security or to store explosive materials. The tunnel has since been filled in.

Terror expert Mubin Shaikh will have more to say about the mysterious tunnel, as the first guest on The New AM 740’s Goldhawk Fights Back after the 11am news.