Andre Marin, the outspoken provincial ombudsman, has been reappointed until at least September 14, the day before the legislature resumes.

All parties supported a motion to temporarily extend Marin’s term after he took to his Twitter account Wednesday night to keep his job.

An all-party committee led by Speaker Dave Levac is reportedly going through dozens of resumes, including one from Fiona Crean, the Toronto ombudsman who is stepping down this year.

But NDP Leader Andrea Horwath is accusing the government of trying to ”undermine” Marin’s office by blocking his reappointment which she supports.

She says he’s proved so effective and done a ”fantastic job,” that he should be reappointed to another full-term, not just for the summer. 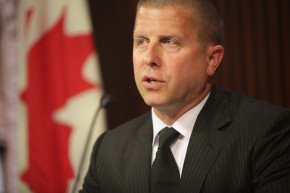 Marin has a large following on his vocal online social media account.

He angered the government in one of his Twitter remarks,  when he called the police detention of protesters during the G20 summit in Toronto in 2010 ”the largest mass arrest in Canadian history.”

Marin has said the reason he’s seeking a third-term is because much work remains and he recently received oversight powers of municipalities, school boards and universities under a bill that’ll soon take effect.