”Mr. Hockey” is said to be doing well after receiving another experimental stem cell transplant this week. 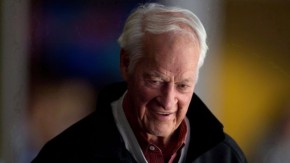 Howe, 87, was treated Monday at the same clinic in Mexico where he underwent the initial injection of stem cells in his spine last December, following a stroke two months earlier.

It left him without the use of his right arm and leg and caused his speech to slur.

Howe’s son Mark, says his brother Murray, who’s a doctor, took their father to the Tijuana clinic, where he got ”a little boost” from the therapy.

After the first treatment, the family called Howe’s turnarond ”miraculous” as he was able to walk again and his ability to speak improved.

Howe will now stay with son Murray in Ohio after having lived with his daughter in Texas.