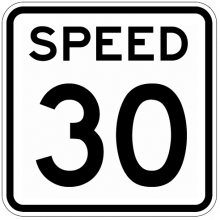 Now a group of downtown councillors has renewed the call and will hear from residents on the issue tonight at Toronto City Hall.

Implementing the plan would cost $1.1 million to install nearly 4450 traffic signs and re-time 310 traffic signals. Councillor Gord Perks refers to the east Gardiner hybrid proposal in saying that the city can afford this change.

“We recently just decided to spend $1-billion helping 5000 people shorten their commute by three minutes, certainly we can find a million or two (dollars) to help everyone who lives in Toronto and East York have safer streets,” Perks explained to the CBC.

But a city transportation staff report says blanket speed reductions are only effective when they’re combined with other measures such as speed bumps and increased police enforcement.