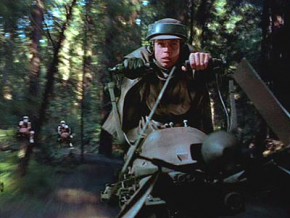 Another idea from a movie is headed for reality thanks to a deal involving engineers in England and the US Department of Defense.  Hover bikes, like those first featured in Star Wars, could be coming to the U.S. military with similar functionality to helicopters. They could be used in military as well as emergency and aid operations.  The prototypes are reminiscent of the racers that Luke Skywalker and Princess Leia used to zoom around the forest moon of Endor in the film Return of the Jedi.  Further research and development is to take place in Harford County, Maryland.