Bullets flew against last night in Ferguson, Missouri as protestors marked the first anniversary of the death of an 18-year-old unarmed black man who was shot by a white police officer. 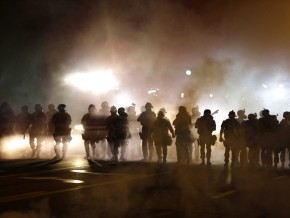 Demonstrators ran for their lives after what police say was a gun battle between two groups firing dozens of shots.  Police say they began following one armed man with whom they exchanged gunfire.  He was shot and is in critical and unstable condition.   A year ago Michael Brown, who was black and unarmed, was shot and killed by white Ferguson Police officer Darren Wilson. A grand jury and the U.S. Department of Justice declined to prosecute Wilson.  The shooting touched off a national “Black Lives Matter” movement.