“This is a good one for the collection, probably the tallest one, and heaviest,” said Tremblay, who’s become a media darling this awards season after appearances at the Screen Actors Guild Awards, the Critics’ Choice Awards and the Academy Awards.

For Emma Donaghue, she says last night’s bash at the Sony Centre for Performing Arts was a fitting cap to a wild year.

Another big winner, was the acclaimed miniseries The Book of Negroes, which collected nine trophies. 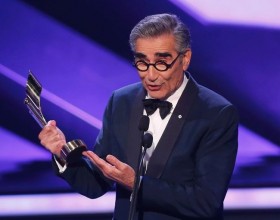 It seems the Canadian Screen Awards could soon have a new name; The Candys.

Show host Norm Macdonald suggested it during his monologue at last night’s bash, as a tribute to late comic John Candy.