One of the Arctic’s most enduring mysteries has been solved, with the help of an Inuit hunter. 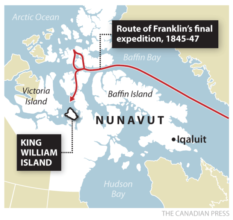 Researchers working in the waters off Nunavut believe they’ve found its remains.

Following the suggestion from the Inuit crewmember who once saw a mast peeking through water, the research vessel Martin Bergmann diverted its course to a bay on King William Island, where sonar scans indicated the presence of a shipwreck.

Adrian Schimnowski is a spokesperson for one of the search groups and says it’s in remarkable condition.

“It looks like it gently slipped to the bottom of the seabed floor. It’s in 24 metres of water, perfectly preserved,” explained Schimnowski.

The well-preserved wreck of Franklin’s other ship, the Erebus, was found in 2014 about 11 metres below the surface in the Queen Maud Gulf, along the central Arctic coastline.