Questions about electoral reform in Canada have been touched off by an interview Prime Minister Justin Trudeau gave to Montreal’s Le Devoir newspaper.

It called into question whether Trudeau is laying the groundwork for reneging on his promise to make the 2015 federal election the last to be conducted under the old system. 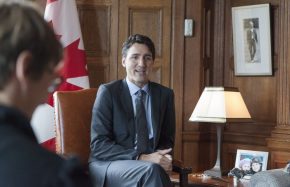 Trudeau said major electoral reforms would require “substantial” support. And he simultaneously argued that the public clamour for change seems to have diminished since his Liberals defeated Stephen Harper’s Conservatives one year ago.

NDP Leader Tom Mulcair took that as clear evidence that Trudeau is preparing to break his promise on electoral reform.

But the prime minister also told Le Devoir that the same high level of support wouldn’t be necessary for less dramatic changes to the voting system, such as ranked balloting.